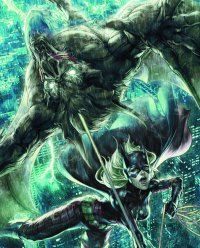 Kirk Langstrom is a scientist with the power to transform into a man-sized Bat.

When The Calculator brainwashed everyone in Gotham to attack Barbara Gordon. Man-Bat, along with Huntress and Catwoman attacked Stephanie in order to get at her. After beating Huntress and Catwoman, Steph was confronted by Man-Bat in the sewers. She manages to get on Man-Bat's back, using her grappling line as a makeshift harness. She complains "Fot @#$%'s sake, Kurt, you've gotta give me a break here!" She managed to ride him into open air.

Not wanting to hurt him, but thinking she couldn't anyway, Steph knew she probably couldn't get through to the "poor man trapped inside this" on a good day. She saw an airport and jumped off the beast, throwing electric batarangs at him to incapacitate him so she could escape. Batgirl (third series) (11)

Find out more about Langstrom here.

Retrieved from "https://stephaniebrown.fandom.com/wiki/Kirk_Langstrom?oldid=10030"
Community content is available under CC-BY-SA unless otherwise noted.