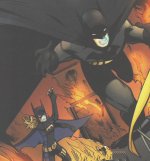 Dick Grayson, former Robin, adventured as Nightwing. He and Stephanie never had any real conversations in either idenyitu, but he helped take down her father, The Cluemaster, on an occasion. He was aware of Tim's relationship with Stephanie, and was shocked when she "died". Stephanie saw him almost beat the Joker to death in Last Laugh #6, but showed no reaction to it, instead focusing on Tim.

Steph has been seen sitting in the same room with Nightwing in Batgirl (27), and Tim and Dick discussed her once, Dick noticing that Tim never chooses perfectly normal girlfriends. Tim cited Dicks relationship with Barbara Gordon in response.

When Batman informed Dick of Stephanie's death, he flew into a rage at him, saying "What are we doing, Bruce?!" and "Stephanie went up against odds so bad even I would have to say it couldn't be done."

After the apparent death of Bruce Wayne, Dick became the new Batman.

After Tim became Red Robin and ran off to brood, Dick told Stephanie he was worried, and sent her after him to talk to him and calm him down. It didn't go so well and Tim stormed out on Steph, demanding her not follow him. This was related in Red Robin #2.

Dick first encountered Steph as the new Batgirl when he watched her dispatch some thugs from afar with the current Robin, Damian Wayne. Damian commented to Dick that Batgirl's work is sloppy, and (believing Batgirl to still be Cassandra Cain) wondered how this woman could be the same one who led the League of Assassins, or whom Batman trusted to lead the Outsiders. Dick agreed, saying, "She's not as good as the other Batgirl."

He then texted Barbara Gordon the information that a new Batgirl was wearing Cassandra's costume. Whether he guessed the new Batgirl was Stephanie or Barbara made that deduction herself is uncertain. All of this happened in Batgirl (third series) (1)

Batman and Robin burst in while Stephanie was fighting the villain Diesel. They charged into the fray before Stephanie could explain that the bad guy bled gasoline, and Damian ended up on a puddle of petrol with the fiery villain. Ignoring Oracle and Batman's warning, Stephanie flung some ice disks at the pair. Unfortunately, she ended up freezing Damian along with the villain.

Dick was not impressed with Stephanie's recklessness and argued with Barbara over what she was thinking, throwing someone like that out into the field. Barbara defended herself and Stephanie, saying that Steph had put out the fire and that at least Barbara wasn't training a murderous twit. Dick yelled at Barbara, saying that especially since Black Mask was now apparently back, Bruce would have never let her get away with sending Steph into the field alone. Babs ended up snapping that Bruce wasn't there anymore, and in grief stricken rage, Dick yelled at Babs to rein Stephanie in and move out of the cave, then he stormed off with Damian. Barbara naturally didn't listen.

Dick had to break up another spat between Damian and Steph and ordered them both off the case of the kidnapping of Francisco Gracia. Steph admitted, "I have to hand it to Dick when I say I feel ten inches tall right now." Dick had eased up his opinion on things though. He even smiled when Babs reminded him that they didn't always see eye to eye on things as Batgirl and Robin either, but then he quickly said that given the current players, the comparison turned his stomach. Babs then teased him about how he'd completely failed to make good on his threat to shut them down.

When Dick went after Gracia, he found the whole thing had been a trap by Roulette to send villains to kill him. It was a good thing Steph and Damian decided to disobey him and get back on the case, because now they'd have to rescue Batman!

Stephanie did come to the rescue and helped both Dick AND Damian by crashing Roxy Rocket's rocket into the menacing Dr. Phosphorus. She led an injured Dick away from the scene of the fight and Dick told her, "good work". She then ran off to help Damian fight Riot and Dick called after her to be careful. "All I can do is try!" she quipped in response.

But the duo did defeat Riot and then Batman, Robin, and Batgirl confronted Roulette. When Damian attempted a one liner on the villianess by saying, "Game over", Stephanie mocked him, but Dick said, "Shhh, he's learning" with a smile. Dick admitted to Barbara in the Batcave that Steph reminded him of her "before...everything" and he apologized for what he'd said earlier. (Batgirl (third series) (5) - Batgirl (third series) (7).

Dick later rescued Supergirl and Batgirl from a composite Superman/Batman robot, shooting a nuke at the robot to make it drop Stephanie and having Damian catch her before she fell to her death. (World's Finest (4))

Stephanie acts as part of Dick's network to take down the new Black Mask. (Batman (697))

Retrieved from "https://stephaniebrown.fandom.com/wiki/Dick_Grayson?oldid=10081"
Community content is available under CC-BY-SA unless otherwise noted.