And hey, costumes also say a lot about the current state of comics and maybe even culture. The Spoiler costume was pretty important for being such a contrast to the more revealing costumes other female comic book heroes tend to wear. The way the first female Robin was presented visually says a lot about what comics culture thought about women taking over traditionally male roles and the modern iteration of the Batgirl costume can say a lot about modern female superheroes.

I make no attempt to hide my bias- I think Steph's Spoiler costume is one of the best looking AND most sensible superhero costumes there is, and her other costumes aren't bad either. I highly value practicality and sleekness and I make my opinions known about every iteration and little change. This is my privilege for my hard work in putting this wiki together! So I hope you like talking costumes as much as I do, because we're about to get our geek on. 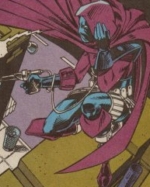 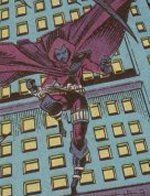 This is the Spoiler Suit as it made its debut in Detective Comics. In it's very first appearance, the purple parts of the costume were miscolored black, so there's kind of a reverse Spoiler (doodoodoodoo) effect going. This is long before the costume got streamlined- so there's a lot of gaudy accessories- a truly huge sash, a utility belt that has intricately looped white rope hanging out of it which doesn't seem to serve any purpose (note that she's not even using it to grapple around), and unnecessary leather panties attached. There's also the distinctive one flap up and one flap down knee length open ended boots with the white bands outside of them. Her left glove also has a random white band attached, who knows why. Oh, the Nineties.

When it wasn't being miscolored, the costume was magenta with blue-black mask, gloves and boots, and white accessories- the utility belt would flip flop between black and white.

Lyle should be applauded for making such a practical, identity concealing costume for a female hero, though. Within the story, Robin couldn't even tell Spoiler was a girl until he unmasked her, in direct contrast to the ultra feminized costumes most female heroes sported. Stephanie actually dresses like someone who really wants to protect herself in battle. And the cloak and full face mask combination really makes for a a nice look. It's got so many distinctive elements that really pop when the costume is eventually streamlined- the hooded cloak, the mask, the legband, and the sash. This is the foundation for future Spoiler costumes- we would be nowhere without it.

And consider that Steph sewed this complicated thing herself! Girl has talent!

The costume is tweaked slightly when Steph reappears in Robin, though it retains it's busyness. The boots aren't quite as tall or huge and the blue black color for her accessories is now full on blue. 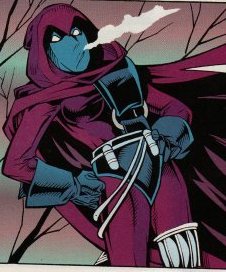 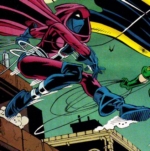 Mike Wieringo tried to tweak Steph's costume for the better, bless him, though his changes didn't stick. The mask, boots etc. are finally plain black and the coloring really makes the outfit pop. Ringo initially did away with the white bands outside the boots, but reinstated the bands on the right boot in # 25. Steph's left boot is full on pirate-style. He also put some nifty tread on her boots. He drew only two canisters on the belt and he permanently did away with the random white band attached to the glove. 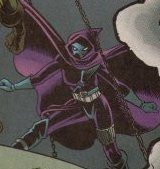 Amanda Conner did a lovely rendition of Steph in a retold origin, and we got our first look at how great the Spoiler costume looks in dark purple and black. She did Wieringo's one-pirate-boot thing and streamlined the belt, making it white, and the infamous rope on the utility belt was coiled to one side instead of threaded all over the place.

Here's Steph's costume in the "Spoiler/Huntress: Blunt Trauma" oneshot which took place during the Cataclysm crossover and Stanzland Johnson's run on Robin. Steph is wearing pirate boots, and no stupid rope on the belt. 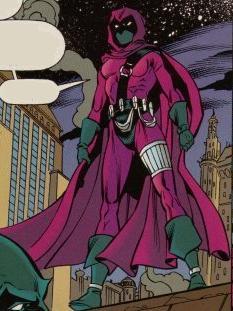 Stanzland Johnson came on as the artist for Robin, and he drew Steph for a very long time. Generally her costume was a garish combination of pink and blue during this period and she was back to open ended boots with white bands and no tread. He also made the sash a bit smaller. Her uncomfortable looking leather-panties-on the outside became even MORE uncomfortable looking when Stanz shrunk it so's it was more like a leather thong leading too...WEDGIE MANIA! 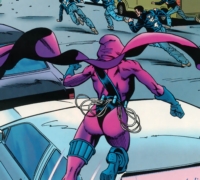 Even the great Amanda Conner succumbed. *sigh* Seriously, I see no reason why Steph would want to wear leather undies that are constantly giving her a wedgie OUTSIDE OF HER FULL BODY COSTUME. What was the point of drawing it? Is is titillating somehow to imagine a girl has a strip of leather jammed between her fully clothed buttcheeks? ..That was a rhetorical question, by the way.

Pete was the one who finally streamlined the Spoiler costume into brilliance. Here's how she first appeared here: 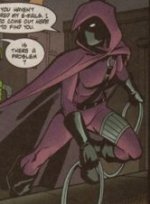 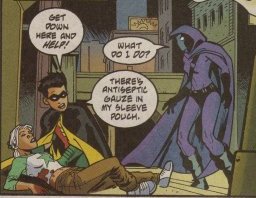 He simplified the boots, making them both plain black pirate boots. The mask, boots etc. were black, there was no longer any gaudy white rope on the utility belt, and no bulky extra big canisters either. He also clearly didn't like the underwear (I'm with you, Pete!) as he often "conveniently" forgot to draw it, but when he did draw it, it was made out of stretchy black material, not uncomfortable leather, and it certainly wasn't a thong. And though the costume is a pinkish color for Woods' first issue...

It was soon colored uniformly purple... I mean, eggplant. Pete also made additional changes to the belt: the canisters were now gray and there were only eight of them that were grouped in fours. He also changed the sash, switching the metal circular part in the middle for this gray square thing near the top (look how professional my descriptions are!). He'd often draw the Spoiler hood without a point at the front. He also made the lenses of her mask really big, so now Steph had super expressive white blot eyes. Finally, he added gray tread to her boots. Now that's a classy costume. 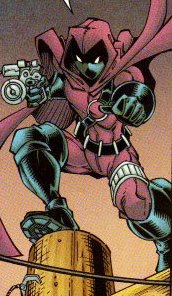 In guest appearances, the costume was streamlined too, though slightly different. The underwear was never used outside the Robin title again.

Todd Nauck kept the circular sash, belt with white canisters (but no rope!) and one thigh high boot over in Young Justice. This Spoiler is also very pink. And adorable 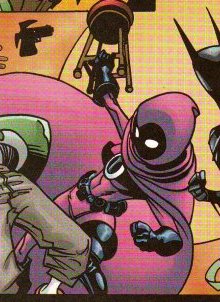 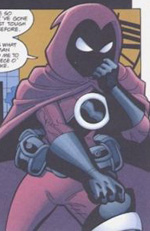 Damian Scott's and Vince Giaranno's Steph in Batgirl is much the same in pinkness. Her eyes are also truly huge, she had a plain black utility belt with no canisters, and her thigh high boot was suddenly on the right while her pirate boot was on the left- and the thigh high boot had a white band over it where the legband would normally be. This look was referenced a few other times- like in Batgirl # 55 later on. Her sash was also huge.

Phil Noto's Steph in Batgirl was also pink- but she had plain pirate boots, and her shiny mask had smaller eyepieces. 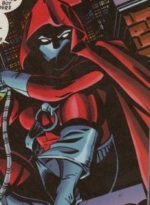 Vomit. Why is Steph's costume RED? And what's with the eyebrows showing through the mask? And she's getting a terrible wedgie, of course.

In Robin # 87, Chuck Dixon and Pete Woods answered a quandary Steph had been trying to figure out since Robin # 25: 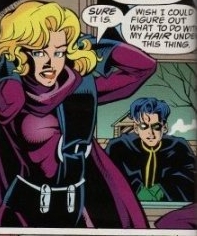 Wish no more, Stephanie! Now you can take care of your hair problems by having your ponytail sticking out of your mask! 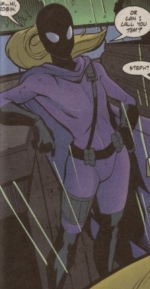 ...It looks really silly though. Not to mention a great handhold for crooks. Also funny how Steph's hair was randomly longer when she had her mask on than when she didn't. Hair extensions, maybe? Anyway, when she debuted this new look with skin-tight thigh high boots (we will see these again), she was back in pirate boots next issue. But the thigh high ponytail/combo is reflected in the Young Justice #51 cover: 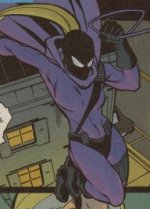 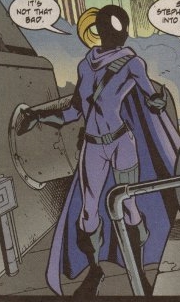 See those undies on the left? Even though Pete liked to forget to draw them a lot, they were there most of the time,. Note that the utility belt is down to four gray canisters. Steph kept her hood down most of the time during the ponytail era and her new look was reflected in other titles, though underwear free. 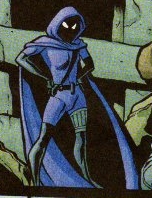 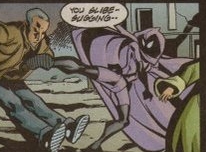 With the help of Pete Woods, Steph finally ditched the dreaded undies in Robin #100. She also got to solve her hair problem by...

...cropping it short! How commonsensical! Now Steph didn't need the silly ponytail sticking out. Some pockets were added to the black utility belt. Steph's gloves were also now skin tight and elbow length, and her boots were similarly skin tight and thigh high. As much as I disapprove of thigh high boots, these don't look very uncomfortable or movement hindering- no more so than her spandex anyway. So this is a great design and utterly functional. 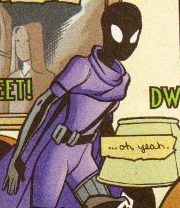 For some reason, Steph kept her hood down a lot in this costume though. I assume for the sake of realism, since a hood would get knocked off someone's head a lot in a fight.

Todd Nauck carried it over in Young Justice, but with a different belt: 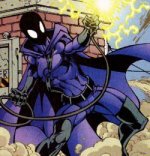 The readers also got some good costume psychology in Robin #111, when Stephanie uses her Spoiler costume as a visual representation of how she viewed her father: 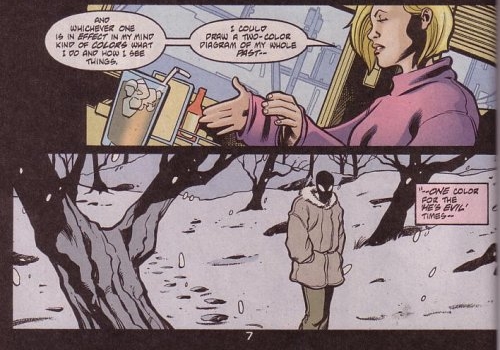 Retrieved from "https://stephaniebrown.fandom.com/wiki/Costume_History?oldid=16750"
Community content is available under CC-BY-SA unless otherwise noted.