Don’t miss this special issue that loops our story all the way back to where it started in BATMAN #28 – but with a twist you won’t see coming!

Summary of Stephness: Another cover for Steph! This time, she's sharing it with Selina and Batman!

After the events of "Gotham Eternal", Batman surveys the Narrows with Harper, now calling herself Bluebird. Batman non-promises to train Harper in crime fighting if she will shelter Steph after he's released her from Catwoman's custody. Harper reluctantly agrees, telling "Blondie" to get friendly with her.

In Harper and Cullen's apartment, Steph sits on the couch, still in her Spoiler uniform, but without mask, as Cullen offers her tea, which she refuses. Cullen and Steph swap "almost died" stories, then Harper baits Steph by accusing her of thinking she's the only one with a sob story. Steph rejects the accusation, but is clearly angry at Batman.

Flashing back to six hours earlier, Steph is woken up by Catwoman's cat and tips the chair she's tied to over, ending up at Catwoman's feet. Selina tells her she's at the Egyptian, her private casino, which she's created using the money she stole from every single other illegal casino in Gotham (60, she claims). Steph's bounty has risen to $200 million dollars, and Selina predicts it doubling in two days. She threatens to hand Steph over to the bounty hunters if she doesn't tell her the secrets of Gotham.

After Red Robin collects Harper to begin the raid on the Egyptian, Selina has Steph on a balcony above the main floor of the Egyptian, telling her of her own history of costumed antics. She points out that Steph is imitating and possibly protecting her father's Cluemaster patterns. Though Steph denies it, Selina insists that the daddy issues are built into Steph's situation. Poking at the fact that Steph did not go to the cops or the feds, but especially not Batman, and she notes that Steph seems deathly afraid of the Batman, to which Steph has no response.

Selina is notified that Harper and Batman have entered the building, and Steph desperately pleads not to be given to him. After Bluebird and Batman take down the casino and enter the safe with Catwoman, Steph begs to stay with Selina rather than go with Batman or back to the streets. Batman offers her a place to sleep and clean and hide from the 18 assassins after her, and though Harper is clearly irritated at the "princess", Steph reluctantly agrees to go with them.

Back at Harper's apartment, Bluebird says she doesn't want to fight (though she wouldn't mind it), but she wants to know why Steph is so scared. Steph muses on Catwoman's insight, and they both nerd out about how cool Selina was. Harper observes that in a normal life, they probably wouldn't get along, but insists that Steph can trust her and the rest of the Batfamily, including Batman. Steph continues to refuse, because the man she saw giving her dad orders and planning what has happened in Gotham was Bruce Wayne, the face of Batman: Incorporated. 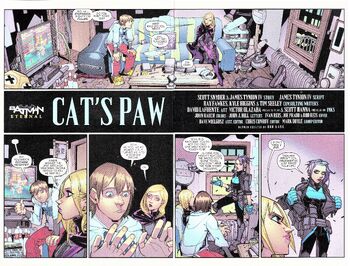 Retrieved from "https://stephaniebrown.fandom.com/wiki/Batman_Eternal_Vol_1_43?oldid=15961"
Community content is available under CC-BY-SA unless otherwise noted.