Spoiler goes head to head with her father, the deadly Cluemaster – and the fate of Gotham City hangs in the balance!

Summary of Stephness: Steph gets the cover! And is full of agency and action and awesomeness. The story has a really nice structure, flashing back to Steph breaking her arm on a bike trying to impress her father, then showing her listening to her father and Hush discussing the master plan to destroy Gotham/Batman/All That Is Good. Arthur turns out to have known she was there the whole time, and immediately attempts to kill her again. She escapes on a motorcycle, and manages to get him to launch a rocket outside of Gotham limits, leading to his arrest, and a parallel to her trying to get his attention as a child on a bike. She ends the story triumphant, as a good Steph should be. 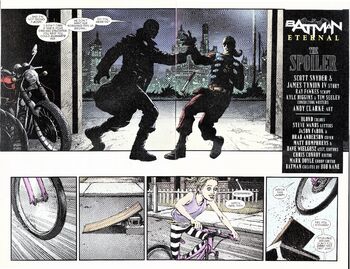 Retrieved from "https://stephaniebrown.fandom.com/wiki/Batman_Eternal_Vol_1_24?oldid=15945"
Community content is available under CC-BY-SA unless otherwise noted.